Obama wants to remake US

To mark the 100th day of his rule as president, Obama took the opportunity to declare his intention to "remak[e] America.” (Reminds me of when Obama spoke of a "fundamental flaw" in the Constitution or when Michelle said it was the first time in her life she was proud of her country.) Thanks, Obama, but the Founding Fathers made this country just fine the first time. Apparently, he wants to be the Founding Father of the USSA.

RT @obamasthoughts We must re-make America; because we got off track somewhere along the line. (Personally, I think it was 233 years ago.) 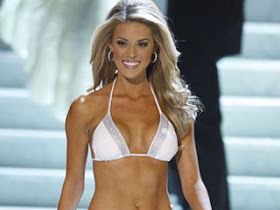 Hot conservative mama
When I saw this headline: Miss California Sparks Furor With Gay Marriage Comments on Miss USA Telecast I immediately knew the only position that would cause "furor" and controversy would be that of support for traditional marriage. Of course, I was correct in my assumption.

When asked by judge Perez Hilton, an openly gay gossip blogger, whether she believed in gay marriage, Miss California, Carrie Prejean, said "We live in a land where you can choose same-sex marriage or opposite. And you know what, I think in my country, in my family, I think that I believe that a marriage should be between a man and a woman. No offense to anybody out there, but that's how I was raised."

SHOCK! HORROR! How controversial she express such a mainstream view that is shared with a large majority of Americans! Apparently, she gave the "wrong" answer:

Keith Lewis, who runs the Miss California competition, tells FOXNews.com that he was "saddened" by Prejean's statement.

"Saddened?" Really, saddened? She is merely expressing the view of a majority of Californians and the laws of that state. Does he realize that his belief that "all religions should be able to ordain what unions they see fit" must allow for religions that exclude gay marriage? Or that "government should be able to discriminate against anyone" means that people who think gay marriage is wrong should also not be discriminated against? He says, "religious beliefs have no politics in the Miss California family" - so what is his beef, then? Never mind that Miss. California never expressly cited her religion as a reason for her answer. Gay marriage proponents never consider the many non-religious arguments against it.

And what were they expecting, really? As a generalization, the women who compete in pageants tend to be conservative in their values, seeking to be as American as apple pie. Feminists routinely criticize pageants "objectification" of women and especially protest the swim suit competition. Apparently gay men are huge fans of pageants, but it would have been truly controversial to the American people if she had expressed support for gay marriage. Perhaps the Miss USA pageant should not have allowed a question it would not accept a certain answer to.

Miss California's answer sparked a shouting match in the lobby after the show.

Does anyone think there would have been such a ruckus if she had given the politically correct answer?

But Prejean told FOXNews.com that she has no regrets and is happy with the answer she gave.

Good for her for standing up for what she believes in, even when it's not popular to a certain audience. I pray she has the strength to withstand the hatred and protest that will be directed at her in the coming days. If anyone knows of how we can send messages of support to her and her family, please let me know.
Alexa at 5:14 PM 6 comments:
Share

What I saw at the DC Tea Party Revolution!

I had the distinct honor and privileged of standing together with hundreds of thousands of Americans across the country today to voice our frustration over the massive expansion of government, it's reckless spending, taxes and "user fees" on everything, and general intrusion into our everyday lives and liberty. We chose to mark Tax Day with a national Tea Party!

I went to the DC Tea Party at Lafayette Square, which is a grassy park across from the White House. It was cold and rainy but that did not dampen the crowds' spirits. Unfortunately, because of the huge crowds, it was near impossible to see the stage or hear the speakers, so I walked around taking pictures of the scene.

Here is my visual diary of the DC Tea Party!

The first pics from the DC Tea Party as you're walking up the street to Lafayette Square. TONS of cars were honking for the sign that asked if you're over-taxed. (You can read signs better by clicking on the pictures) 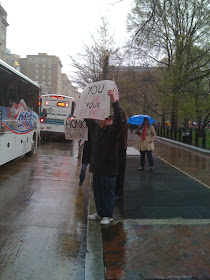 Part of the crowd as I was walking toward it in Lafayette: 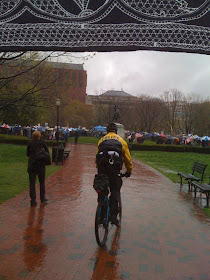 View of the Tea Party crowd with the White House as a back drop: 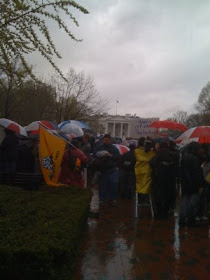 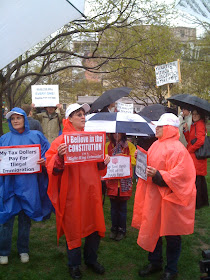 You can almost see the stage through all of the people: 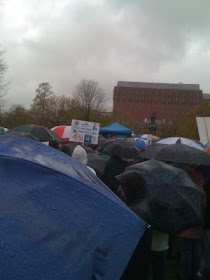 Now there's a tax we can all get behind: 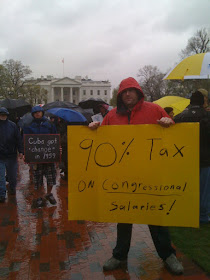 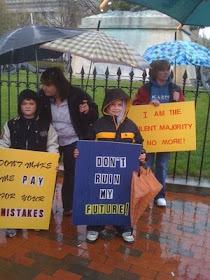 A smaller group of protesters in front of the White House: 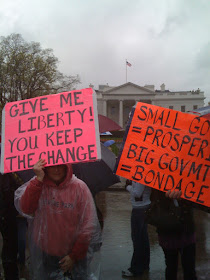 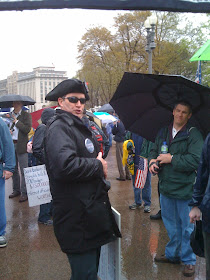 The grassroots protest were anyone could take the megaphone was in front of the White House, while the protest with national speakers was yards away in Lafayette Square across from the White House: 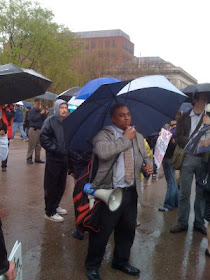 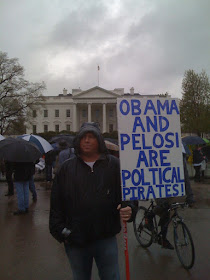 Some basic economics for Obama to know about small businesses: 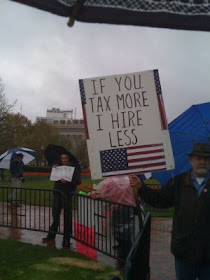 This is what TEA really stands for: 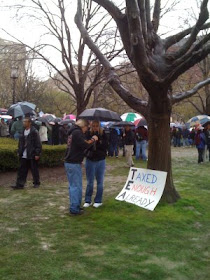 A sea of umbrellas around the stage: 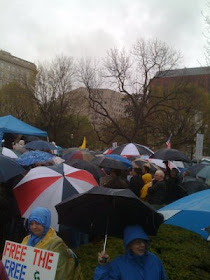 Part of the crowd as I was leaving Lafayette Square: 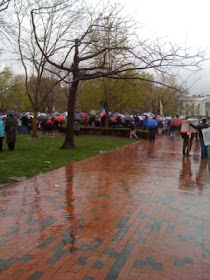 Please follow me, (@AlexaShrugged) on Tax Day, April 15, as I live Tweet and TwitPic the DC #teaparty!

The Queen receives an iPod from Obama 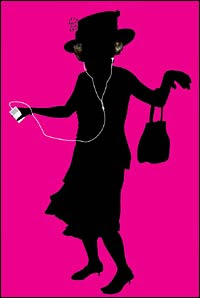