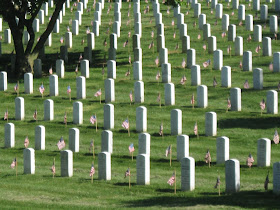 If not Obama, Arizona, Military, then WHO?

The American public wants to secure our borders and stop illegal immigration but the federal government is trying to pass off responsibility while preventing enforcement by states like Arizona - which leaves us wondering who will actually do it.  Reminds me of the grade school song "Who stole the cookies from the cookie jar?"

The latest answer was short lived.  It sounded like the military was going to be sent in to help fix the problem, but now comes the clarification that they will not be addressing illegal immigration:

US troops won't be used to stop illegal immigration: US


US National Guard troops being sent to the Mexican border will be used to stem the flow of guns and drugs across the frontier and not to enforce US immigration laws, the State Department said Wednesday.

The clarification came after the Mexican government urged Washington not to use the additional troops to go after illegal immigrants.

[How do they not see that the gun and drug problems are just symptoms of our broken immigration laws and the refusal to enforce them?]

President Barack Obama on Tuesday authorized the deployment of up to 1,200 additional troops to border areas but State Department spokesman Philip Crowley told reporters, "It's not about immigration."

He said the move was "fully consistent with our efforts to do our part to stem, you know, violence, to interdict the flow of dangerous people and dangerous goods -- drugs, guns, people."

[Mr. Crowley, sir, please explain to me how interdicting the flow of people is NOT about immigration.  Do you really think that none of the "dangerous people" are illegal?  What, is it only Americans running the Mexican drug wars and killing 23,000 people in 3 years?  Good luck stemming the, you know, violence without enforcing the law and addressing the real problems.]

The border is a mess - oh, goody a terror watch for the TX-MX border! - is it too much to ask that SOMEONE enforce our borders and laws - preferably the department or agency that is SUPPOSED to be enforcing them?
Alexa at 8:32 AM No comments:
Share

Marketing extra-large condoms to kids - wrong on so many levels!  SUCH a ridiculous article!

High school students [!] and college-age adults have been complaining to District officials that the free condoms the city has been offering are not of good enough quality and are too small [really? REALLY??!!!] and that getting them from school nurses is "just like asking grandma or auntie."[try BUYING them!]

So D.C. officials have decided to stock up on Trojan condoms, including the company's super-size Magnum variety[yep, every teenage boy needs those!], and they have begun to authorize teachers or counselors, preferably male, to distribute condoms to students if the teachers complete a 30-minute online training course called "WrapMC" -- for Master of Condoms.[gotta make it hip for the youngins!]
...
Health officials and consumer advocates say that in terms of preventing pregnancy and sexually transmitted diseases, there's no difference between Trojans and the less-expensive Durex condoms that the city is offering.

But because Trojans are considered the better-known brand, city officials say, they are willing to spend an extra few thousand dollars a year [money-shmoney] to try to persuade sexually active teenagers to practice safer sex. The Durex condoms will still be offered.

"We thought making condoms available was a good thing, but we never asked the kids what they wanted," [ever ask the kids if they didn't want the pressure to have sex that free condoms bring? ever ask if they wanted to be told it's ok to NOT have sex?] said D.C. Council member David A. Catania (I-At Large), chairman of the health committee.
...
" . . . to try to destigmatize condom use, not only for kids[!!!], but for grown-ups." [kids should not be having sex!!!]
...
"The gold package certainly has a little bit of the bling quality," said Michael Kharfen, a spokesman for the city's HIV/AIDS administration.

Via NewsBusters - a liberal reporter admits wishing that the bomber wouldn't have terrorist connections, then desperately tries to suggest alternative motives:

Contessa Brewer: "There was a part of me that was hoping this was not going to be anybody with ties to any kind of Islamic country...Were there failed family ties? Did he have a strong community network here in the United States? Did he feel isolated?"

And how about this CBS News headline: Faisal Shahzad's Motive Shrouded in Mystery

Yeah, this one's really hard to figure out - I have NO IDEA why a Pakistani who trained in a terrorist camp would attempt to set off a bomb in New York City!

Next up in the MSM playbook: Hand wringing and asking "Why do they hate us?!"
Alexa at 6:15 PM No comments:
Share

FDR Wants to See Your Papers

You can always rely on the glorious Mark Steyn to put leftist hysterics into perspective:

As I write, I have my papers on me — and not just because I’m in Arizona. I’m an immigrant, and it is a condition of my admission to this great land that I carry documentary proof of my residency status with me at all times and be prepared to produce it to law-enforcement officials, whether on a business trip to Tucson or taking a 20-minute stroll in the woods back at my pad in New Hampshire.

Who would impose such an outrageous Nazi fascist discriminatory law?

Er, well, that would be Franklin Roosevelt.