How dare you call us violent and intolerant!!! 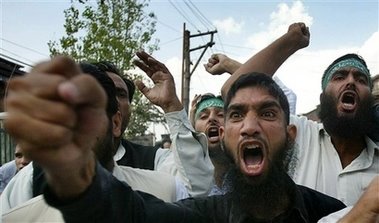 Palestinians wielding guns and firebombs attacked five churches in the West Bank and Gaza on Saturday, following remarks by Pope Benedict that angered many Muslims.
...
In Gaza, militants opened fire from a car at a Greek Orthodox church, striking the facade. A policeman at the scene said he saw a car armed men inside flee the scene. Explosive devices were set off at the same Gaza church on Friday, causing minor damage.
There were no claims of responsibility for the last three attacks Saturday.

"The people who did this are uneducated and ignorant," said the Gaza church's prelate, Rev. Artinious Alexious.