It's these 'animal lovers' that are the nuts! 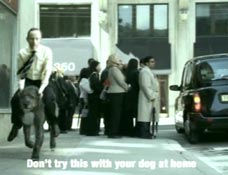 Breakfast food company Kellogg's has come under fire from animal lovers furious about a television advert showing a man riding a dog like a horse.

Nearly 100 complaints have been made against the new Crunchy Nut Cornflakes advert, which shows a very small man finishing work and riding home on the back of an Irish Wolfhound.

Dog lovers say the behaviour in the scene is cruel and could be copied by children.

However, no action is to be taken by the Advertising Standards Authority, which has dismissed the complaints.

It says viewers would be able to spot that the scenes were computer-generated.

In the advert, the man is seen riding the dog home from work. Text at the bottom of the screen reads: "Don't try this with your dog at home."

After the man arrives home, milk is poured on to a bowl of the cereal by what appears to be the dog's paw. The man is then seen sitting at his kitchen table eating it.

A spokesman for Kellogg's said the idea of their advertising campaign was to depict methods of transport that are so unfeasible they defied reality.
Kellogg's said a vet was present at the shoot to ensure the well-being of the animal. It added that no one actually rode the dog.

The Advertising Standards Authority cleared the advert, providing it was shown away from programmes that children could watch.
Alexa at 8:12 AM
Share