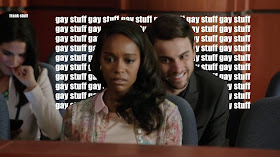 I'd noticed that the fall's hottest new show "How to Get Away with Murder" has had an usual focus on its gay character Connor Walsh and his sex life, but last week's episode "Let's Get to Scooping" that aired on October 16, 2014 was so out-of-control, over-the-top, and in-your-face that I knew there was something else at play.

The episode featured a graphic, kinda rough and dominant gay sex scene followed by a character saying THREE TIMES, “He did this thing to my ass that made my eyes water" - it was repeated because it was part of a recorded conversation, but inclusion of that line when the tape was replayed was so COMPLETELY unnecessary that I could only conclude its purpose was to provoke. A quick Google search instantly confirmed my suspicions:

How To Get Away With Murder Creator: Get Used to Two Men Kissing:


Out TV writer/producer Peter Nowalk is using the gay character in the show he created, How To Get Away With Murder, to push his gay agenda. ...

Do it, man. Keep it going. Desensitize the shit out of viewers.

So it WAS purposefully out-of-control, over-the-top, and in-your-face. In fact, the creator Peter Nowalk told E!Online:


"I knew I wanted to push the envelope, especially with the gay sex," Nowalk explained to me. "And to me, writing the gay characterization and writing some real gay sex into a network show is to right the wrong of all of the straight sex that you see on TV. Because I didn't see that growing up, and I feel like the more people get used to two men kissing, the less weird it will be for people. I just feel like it's a lack of vision that you don't see it on TV, but ABC has never had a note about any of the weird stuff in the show, so I'm gonna keep it going."

Wow. He wants to "right the wrong" of straight sex on TV. Dude, seriously? I am so sick and tired of TV shows pushing their radical liberal agenda on viewers. But Nowalk goes so far above and beyond the typical encouragement of tolerance of gay relationships and marriage, he is pushing us to accept and celebrate gay sex! (BTW, you know what I didn't see growing up? Any TV roles depicting smart, strong, conservative women shown in a positive light - not liberal fantasies of what a conservative woman should believe, ala Calista Flockhart in Brothers and Sisters. When can we right that wrong?)

Furthermore, there is rarely a reason for any kind of sex to be on network TV shows except to be titillating and "progressive." I guess TV producers feel like they've pushed as far as they can go with straight sex for sensationalism that now they have to exploit gay sex. I told Shonda Rhimes as much and surprisingly she responded to me:

@shondarhimes Pretty low standards when, "He did this thing to my ass that made my eyes water” is repeated 3 TIMES - outrageous gay or str8!
— AlexaShrugged (@AlexaShrugged) October 23, 2014

The editor of a gay entertainment website seemed to agree that some of the gay sex scenes "felt a little craven:"


Maybe my unease with the show is that, so far, it depicts gay intimacy as something shocking rather than natural and universally relate-able.

How to Get Away with Murder and other Shonda Rhimes shows are definitely unsettling conservative viewers with gay content. Which may be a great thing– but less of a great thing when it inadvertently reinforces the stereotype that gay men are hyper-sexual creatures. ...

The remedy for the lack of gay representation in television maybe isn’t to load it up all in one series. Can’t we spread it out a bit? Having so much Connor action in HTGAWM and so little everywhere else on the TV dial feels a little like gay gerrymandering.

(This writer also had me laughing when he said, 'But I find myself cringing when his onscreen conquests say things like “he did this thing to my ass that made my eyes water.” What, did he stick an onion up there or something?')

So, to all who say, "Don't like it, don't watch it," fine, I won't, although, maybe I'll follow along by reading spoilers online. Sucks that the show has forced me into that choice by having a mission that seems to be to make viewers uncomfortable, "unsettled," and "desensitized" in some bizarre reverse micro-aggression fantasy.* But it's their loss to alienate a viewer in the coveted women with disposable income aged 18-34 demographic.

*This isn't my only reason to stop watching. I also hate every character on the show and find myself rolling my eyes every other minute at some smug and pretentious piece of dialogue, implausible and ridiculous "legal" breakthrough, or frustrating and incomprehensible character action. Also, this kid's dumb facial expressions: