Debunking the Myth that 99% of Women Are Using Birth Control

There's a meme going around in the media that 99% of women are on birth control.  First of all, if this is true, clearly there is no crisis of accessibility or cost - 99% is as universal for coverage as you'll ever get.  And if 99% of women already have a way of getting or paying for birth control, then why in the world do we need to make it free through an Obamacare mandate?? But anyway, we need to examine this 99% stat.

The 99% figure comes from Planned Parenthood's old research firm, the pro-abortion Guttmacher Institute.  For this discussion, we will make the leap that Guttmacher's figures are reliable despite their bias.  In a 2010 fact sheet titled Facts on Contraceptive Use in the United States, Guttmacher says, "Virtually all women (more than 99%) aged 15–44 who have ever had sexual intercourse have used at least one contraceptive method."

#1: This stat by definition includes women who have had sex only once and/or have only used contraceptives once.  This is not saying 99% of women are using birth control currently but have used it at least once in their lifetime. In fact they explicitly say that "62% of the 62 million women aged 15–44 are currently using a method."  62% is still a lot but it's not 99%, but ...

#2: Note the use of the word "method" in the previous quote - there's a big distinction between using a "method" and "contraceptive use" which the fact sheet has in its title and subheadings.  "Use" implies using a contraceptive device, rather than doing something that would prevent conception.  This is important because to get their 99% figure, they include withdrawal and periodic abstinence (natural family planning,etc.) as contraceptive methods!

Really, Guttmacher, you include women who have only had sex once and their partner "pulled out" to say 99% of women have used birth control??

#3: They also include the permanent (at least in intention) one time procedure of getting a tubal sterilization or vasectomy, which combine to be a plurality of contraceptive "use" (about 37%, with the Pill #1 by itself at 28%).  Emergency contraception - a potential abortifacient - is included under "other."  In this Obamandate conversation, contraception, abortifacients and sterilization have been separated into their own categories.

#4: Along with vasectomy, the male condom is included in this chart, so these should not be included in any stat on the use of birth control by WOMEN.  And to the kind of people offended that yesterday's hearing on the Obamandate only had men on the panel because they think contraceptives are only a women's issue are wrong: this is a reminder that it's a men's issue, too.  By the way, the panel was all men DID have women (more below in an update), but was a majority men because the focus was on religious objections to the mandate and religious experts or priests, rabbis, etc. are predominantly male.

#5: The fact sheet says "only 7% of women aged 15–44 are at risk for unintended pregnancy but are not using contraceptives."  This does not address WHY these women are not using contraceptives - maybe they don't care either way if they get pregnant - but Democrats seem to assume it is because they're not handed out for free.  So, we're forcing EVERYONE to subsidize ALL women's birth control for Obamacare - including those who can pay, those who already get it free or at a discount - because up to 7% of women "at risk" are not using it???

That's the real story behind the 99% myth and its relevance to the Obamandate. 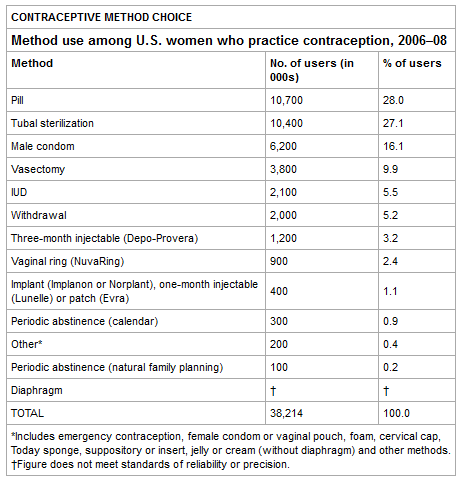 UPDATE: Great quote from one of the women on the Obamandate Congressional panel (my emphasis) via Heritage:


"This debate is not about whether women have the right to obtain these drugs. Rather, this debate is about whether those who believe that contraceptives or abortifacients violate their religious convictions must pay for them. There is a vast difference between the right to make a purchase for oneself and requiring someone else to pay for it."


Read more on why I oppose this Obamacare contraceptive mandate here: