No, Planned Parenthood, Birth Control is NOT "Basic Health Care"

Flashback: Susan G. Komen for the WIN FAIL: What Planned Parenthood doesn't want you to know 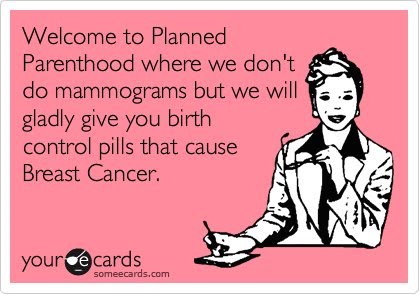 Ok, so I've talked about #1 Controlling the Birth Control Debate and #2 Debunking the Myth that 99% of Women Are Using Birth Control, now for Part 3 I am going to discuss this nauseating quote from a Planned Parenthood statement celebrating the Obamacare contraceptive mandate (which they call a "benefit"):


"The birth control benefit underscores the fact that birth control is basic health care, and is fundamental to improving women’s health and the health of their families."

No, Planned Parenthood, birth control is NOT "basic health care."

Unlike abortion, which stops a beating heart and ends a life, I am pro-choice when it comes to contraception.  However, contraceptives are, on the whole, not a health care need, but a lifestyle want.  The vast majority of women don't use contraception because they need to prevent pregnancy for their health but because they don't want children at that particular point in time in their lives, for whatever reason, that's fine to me.  They choose the birth control that they want based on things like convenience or side effects - perhaps using a barrier method to avoid bad ones like weight gain or using hormonal contraceptives to gain good ones like clearing up acne.  Ok, all well and good, but here's the rub: these are not real medical or health reasons and they do not deserve to be force-subsidized by religious objectors who consider it a sin or even just by regular Americans who don't think it's their business to pay for it!  As IMAO_ said: If you want contraceptives to be a personal matter, you probably shouldn't force other people to pay for it.  Not to mention the fact that you're trading in a whole lot of freedom to the government for no co-pay.

No, Planned Parenthood, birth control is NOT "fundamental to improving women’s health."

Of course, as Jim Geraghty notes, there may be some women with real medical reasons who genuinely need help paying for birth control, but we should tailor policies for those specific needs, not issue a blanket ultimatum that all women - regardless of need or ability to pay - should get it for free, which is HUGELY expensive and will raise the premiums for everyone who has insurance (i.e. all of us, under Obamacare.)

No, Planned Parenthood, birth control is NOT fundamental to improving "the health of [women's] families."

Come on, is that a joke?!  Is there a PP press release generator that randomly spits out combinations of words like "women," "health," and "families" and whatever it comes up with is published?  Not even going to bother ...

Read more on my discussion of the Obamacare contraceptive mandate here:

Part 2: Debunking the Myth that 99% of Women Are Using Birth Control