Astounding: Hillary Claims the Taliban Five Poses No Threat to the United States 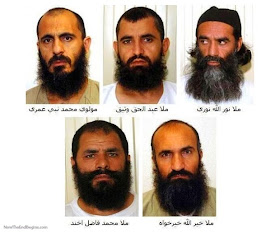 In an interview that aired on the Today Show, presidential wannabe Hillary Clinton dismissed criticism of the Obama administration’s trade of the five most dangerous Taliban terrorists held in Guantanamo Bay for an alleged deserter.


These five guys are not a threat to the United States. They are a threat to the safety and security of Afghanistan and Pakistan. It’s up to those two countries to make the decision once and for all that these are threats to them. So I think we may be kind of missing the bigger picture here. We want to get an American home, whether they fell off the ship because they were drunk or they were pushed or they jumped, we try to rescue everybody.

It is Clinton, with her astounding willful blindness or outright stupidity, who is missing the bigger picture here. A threat to Afghanistan and Pakistan, an unstable region where we still have troops being killed, is a threat to us. These five “guys” are hardened terrorists dedicated to attacking America anywhere they can. To say that the Taliban does not pose a threat to the United States pretty much ignores the entire history of the 21st century and the War on Terror.

It is scary to think that a President Hillary Clinton would bring a pre-9-11 mindset to her potential administration – a mindset that led to the horrific murder of 3,000 Americans on U.S. soil. Would she follow in the footsteps of her husband, who allowed the Taliban to take over Afghanistan in the 1990s, leading to Al-Qaeda gaining a stronghold from which to launch terrorist attacks? Don’t forget Bill Clinton infamously refused to take action when Osama bin Laden was offered – multiple times – on a silver platter.

We already know the deadly consequences of leaving Afghanistan alone to handle the Taliban, why would we EVER want to repeat that?

And let’s not allow the outrageousness of the first half of Hillary’s quote to overshadow the fact that she goes on to conflate the issue of negotiating with terrorists for a possible traitor with the military maxim of leaving no man behind. The circumstances of how Bergdahl fell into Taliban hands matters greatly.

Suggesting that Bergdahl might have been drunk or forced out is an attempt to cloud and make light of the issue to an audience of low-information voters who don’t know any better. Meanwhile, the rest of us already know he purposefully and willingly abandoned his post, a grievous offense in the military and one that any Commander-in-Chief should take seriously. Instead, Hillary is too clever by half and flippant about it.

You can be sure that when Hillary, and the Obama administration, says the important thing is to “get an American home,” they don’t mean so Bergdahl can be court martialed and face the consequences of allegedly deserting. I’m willing to bet that both would work hard to save face by preventing Bergdahl from ever being tried and the full details of his disappearance revealed.

Obviously, this is not the first time Hillary has demonstrated an unnerving indifference to foreign policy crises. At this point, what difference does it make? Hopefully enough to derail her 2016 presidential bid.