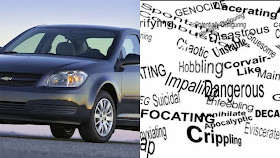 This article originally appeared on The Political Insider:

Digitas Daily is out with a hilarious video spoofing General Motor’s “Judgment Words” list of phrases employees should avoid when reporting problems. See if you can tell which ones in the video are real and which are fake – it’s harder than you think!


GM told engineers to avoid using dozens of words when communicating about vehicle problems that could potentially lead to recalls, including everything from “safety” to “Kevorkianesque.”

A PowerPoint presentation included in the company’s consent agreement with NHTSA unveiled Friday shows the nation’s largest automaker told engineers to avoid terms both absurd and mundane for fear of e-mails leaking to the media or regulators.

The presentation, given in the first quarter of 2008, was meant to teach engineers to use sparing, non-emotional language to describe problems that could potentially lead to auto recalls.

“Be factual, not fantastic, in your writing,” the PowerPoint notes at one point, adding later: “For anything you say or do, ask yourself how you would react if it was reported in a major newspaper or on television.”