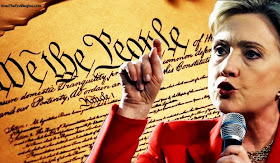 On a CNN townhall Tuesday, Hillary Clinton reiterated her vociferous, if uninformed, support for a new ban on assault weapons and high capacity magazines. In the course of her answer to a question from the audience, Hillary ominously declared, “We cannot let a minority of people hold a viewpoint that terrorizes the majority of people.”

Left unanswered is how exactly Hillary would disabuse these people of their viewpoint. A scary thought.