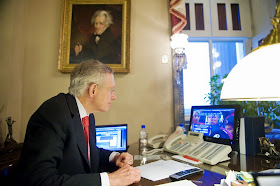 This article originally appeared in The Political Insider:

After Reid and 49 other Senate Democrats signed a letter to NFL Commissioner Roger Goodell asking the league to change the team name, Redskins President Bruce Allen defended the name and invited Reid to attend a home game to “witness first-hand that the Washington Redskins are a positive, unifying force for our community in a city and region that is divided on so many levels.”

I received your letter and invitation to attend a Washington, D.C. football team event.

During my time in the United States Senate, I have worked to right many of the injustices endured by Americans throughout the country. Among the most egregious in the history of our country are those injustices inflicted upon American Indians, Alaska Natives, and Native Hawaiians. This is personal for me. I represent 27 tribes as the Senator from Nevada and have worked to protect their homelands and their sovereignty. I have a duty to ensure that the United States uphold centuries-old treaty and trust obligations towards Native Americans, and I take this responsibility very seriously.

I will not stand idly by while a professional sports team promotes a racial slur as a team name and disparages the American people. Nor will I consider your invitation to attend a home game until your organization chooses to do the right thing and change its offensive name.

“I will not stand idly by…” Hmmm, you mean like you did the previous 70+ years of your life before an 81-year-old team name became your pet project only a few short months ago, Harry? How about the 7 years you’ve been Senate Majority Leader, and 27 years a U.S. Senator, apparently it was okay to stand idly by then. There are many reasons to refuse tickets to a Redskins game, but this is one of the dumbest.
.
Alexa at 2:30 PM
Share