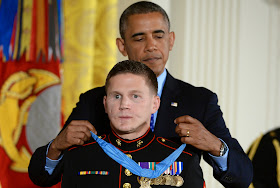 The article was first published on The Political Insider:

Yesterday Marine Cpl. William “Kyle” Carpenter, 24, became the 11th service member of the War in Afghanistan to receive the Medal of Honor for “conspicuous gallantry and intrepidity at the risk of life above and beyond the call of duty.” In short, he is one badass hero:


He is credited with deliberately lunging at a hand grenade after an insurgent tossed at him and another Marine, Lance Cpl. Nick Eufrazio, while they manned a rooftop security post in a small, dusty compound in Marjah, Afghanistan.

Carpenter still bears the scars of that Nov. 21, 2010, incident, but has made a remarkable recovery. He has run a marathon, sky-dived and completed a mud-run competition since being injured, the president noted, and pushed through physical therapy and surgeries to retire medically and attend the University of South Carolina. …

The fact that Carpenter was able to laugh in response is a testament to modern medicine and quick work by both his doctors and his fellow service members. Carpenter’s vital signs flat-lined numerous times after he was injured, Obama recalled, but the Marine was resuscitated each time.

“I want you to consider what Kyle has endured just to stand here today: More than two and a half years in the hospital; grueling rehabilitation; brain surgery to remove shrapnel from his head; nearly 40 surgeries to repair a collapsed lung, fractured fingers, a shattered arm broken in more than 30 places; multiple skin grafts,” Obama said. “He has a new prosthetic eye, new teeth, and one hell of a smile.”

Land of the free, because of the brave. The United States of America salutes and thanks you, Cpl. Carpenter.